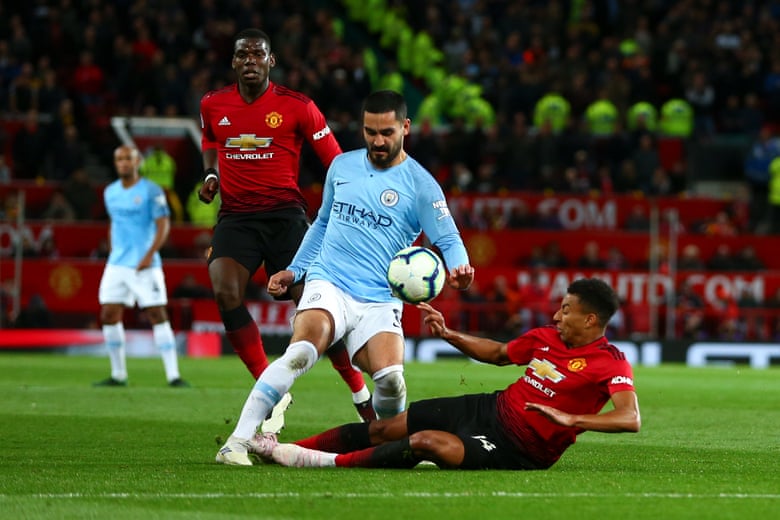 Manchester City struck an important blow in their pursuit of a second successive Premier League title with a convincing derby victory over Manchester United at Old Trafford.

Pep Guardiola’s side knew anything but a win would leave Liverpool at the top of the table and in charge of their own destiny with only three games left.

City were anxious in a goalless first 45 minutes but turned up the heat after the break to take them one point clear at the top of the table.

They have played the same number of games as Liverpool, performing with control and composure to eventually outclass United.

Bernardo Silva’s low drive went inside United keeper David de Gea’s near post after 54 minutes and the keeper was at fault again when Leroy Sane’s drive went straight through him.

Liverpool must now respond at home to relegated Huddersfield Town at Anfield on Friday, while City travel to Burnley on Sunday.

City’s players showed nerve as well as quality to come through what many felt would be their toughest assignment between now and the end of this enthralling title campaign.

They could have been forgiven for fearing the worst after a goalless first half in which they were superior but saw chances get away and also demonstrated a tendency to over-elaborate.

Instead, they moved through the gears after the break to run out easy winners in front of their jubilant fans, who clearly recognised the significance of winning this game in hand to move ahead of Liverpool and stay in control of their own destiny.

Sane’s introduction after Fernandinho’s injury gave City extra cutting edge but it was the magnificent Bernardo Silva who made the breakthrough when his low shot went past the pedestrian De Gea.

City never looked back, although in truth they barely had a moment’s trouble defensively all night.

Sane’s second – proving again what an attacking weapon he is – merely gave the scoreline a greater air of reality and the closing stages resembled a training exercise as City kept possession and United chased shadows.

Guardiola and his players celebrated at the final whistle after their second big win after edging past Spurs on Saturday.

The biggest question of all – who will be champions? – remains to be answered but at least City know it remains in their hands.